Baby Teeth - order of appearance, And should I keep Them

A lot of parents are concerned about their baby’s teeth. A baby may show signs of teething within three months of birth. However, teething may start after six months of birth, but in some babies, it can get as late as one year. Teething majorly depends upon the heredity. If the parents go their teeth within six to three months, they can expect their baby teeth to start within three to six months.

It worries a lot of parents, and the reason behind this is their lack of understanding knowledge about baby teeth.

One of the most significant phases of a woman’s life is pregnancy. It is a phase where women have to be extra cautious about their health as it can negatively affect the development of the baby. With pregnancy, a woman must expect some major changes in her body. From her hair, physique, to her teeth, everything will undergo significant changes.

The first thing to understand about baby teeth is the order of appearance. Teething follows a fixed order of eruption. The eruption of baby teeth starts with the lower center incisors and ending with the upper second molar. By the age of 21, all baby teeth are replaced with permanent teeth.

The first teeth to erupt in babies, after six to twelve months of birth, are the bottom middle teeth. These teeth are the lower central incisors.

The first molars to appear are on the upper side of the mouth. These teeth are known as the upper first molars, which erupt after 19 months of birth.

After twenty-three months of birth, the teeth between the incisors and the first molars begin to erupt. These are the upper canines.

The lower canines fill the gap between the lower first molars and incisors at the same time as the upper canines.

The rear molars upper in the lower gums first, and these begin to erupt within thirty-three months of birth.

The last teeth to appear in a baby’s mouth are the upper second molars. With these, the teething ends as the set of 20 baby teeth are now complete!

The signs of teething in a baby include rosy and flushed cheeks, excessive dribbling and chewing, and restlessness. If a parent observes any of these signs, they need to make sure to take proper pain management steps for their little one.

Teething can sometimes be painful for a baby. It can make a baby cranky and difficult to handle. It is best to take the necessary steps to ensure that the pain minimal and a baby stays healthy throughout the process.

Itching and irritation in the gums can put a baby in pain. Parents can gently rub the sore gums of their babies. They can do that by using a brush with soft bristles suitable for their babies. Moreover, parents can rub the gums using a clean finger.

Parents are not always around to rub the sore gums with a finger or a brush. In such cases, giving a baby teething ring is a smart option. The teething ring should be soft and made of rubber. If a rubber one is not available, parents can opt for a plastic one that can be refrigerated. It is important to avoid giving a baby liquid-filled plastic rings.

The Seven Baby Teeth Facts Every Parent Should Know

The oral health of a baby is as crucial as their physical health. Parents need to pay attention and attend to the oral health needs of their babies to ensure their proper development and growth. Here is a list of the most important baby teeth facts that every parent must know.

Parents need to understand that the maintenance of a baby’s oral is essential. At about six months of age, parents need to make fluoride a part of their child’s diet. It prevents tooth decay in babies and even hardens the enamel of their teeth.

Parents get worried when their baby is in pain due to teething. A baby finds it hard to sleep or rest because of the pain. Massaging the gums with something cold, not frozen, or acetaminophen can soothe a baby’s teething pain and even help them sleep better at night.

Brushing teeth is important, even for babies. Even if a baby has just one or two teeth, brushing them using a soft bristled toothbrush is essential. Brush a baby’s teeth with fluoride toothpaste to protect them from gum diseases and tooth decay.

Family Dentist Vs. Pediatric Dentist – Choosing the Right One for Babies

A pediatric dentist has the expertise to make kids feel comfortable, and they have the skills to deal with babies. Moreover, they design kid-friendly clinic settings to make the kids feel at ease. A dental clinic can be scary for the kids, but a pediatric dentist will make sure a child is not scared. These dentists provide minimally invasive techniques.

Looking for a pediatric dentist who can help you in maintaining your baby’s oral health? 4Smile will help you make the right choice. We have a whole directory of the best pediatric dentists who are experts in their fields! 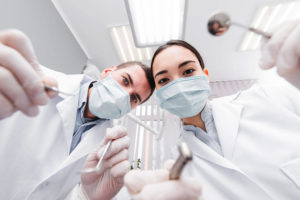 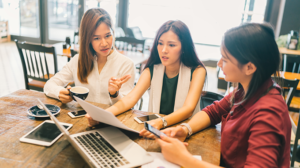 Issues People Have With Their Dentist

Finding the Right Family Dentist for You

Finding the Right Family Dentist for You IN THIS ARTICLE Another loose tooth that your child’s terrified of losing? Despite the generous gifts left behind

If you are suffering from missing teeth problems, it’s important to see a dentist about getting a replacement. A missing teeth can affect your bite, weaken your jaw bone, effect your appearance, and your overall health.